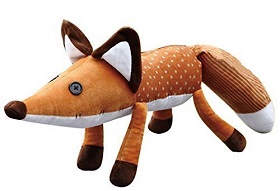 The French 2015 animated feature of Antoine de Saint-Exupéry’s The Little Prince will be released in America by Paramount on March 16, 2016. Its associated merchandising includes a plushie of the book and film’s talking fox.

The illustrated announcements on Amazon.com imply that the plush fox is poseable. One shows it standing on two feet next to the film’s Little Girl. Another shows it on all four feet.

The latter is priced $80.00 marked down to $19.99. The former is $14.99, and the order is for both figures. A foreign imported fox, clearly a different plushie, is currently unavailable and unpriced.

Well, I haven't seen the movie yet, in either French or English; and the fox is a pretty minor character in both the book and the movie. But, hey! anything to justify its inclusion in Flayrah.