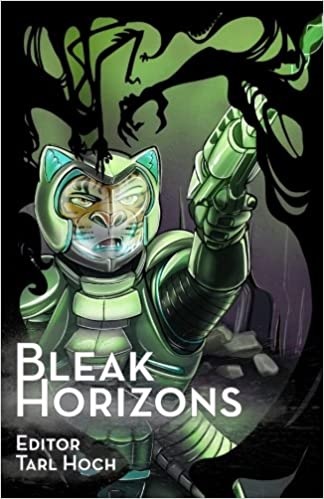 A great many people only experience science fiction by what my mother and millions of others referred to as "monster movies". From Frankenstein to Aliens and beyond, the unknown and the unexplored are often our undoing. Bleak Horizons, edited by Tarl Hoch, is a wonderful collection of 15 stories that mix SF and Horror with various levels of anthropomorphic settings and characters. And, full disclosure, one of those stories is mine. Happily, the mix includes more than just blood thirsty monsters and end of the universe scenarios.

Overall my favorite stories in this anthology are Hardwire, Pentangle, and The Ouroboros Plate. My least favorites are 4/13/2060 and Not Like Us. Below is a short review of all the pieces. I think you should snag a copy, if only to read my favorites and have a taste for this genre. However, I also really enjoyed Carmen Miranda's Ghost Is Haunting Space Station 3 so you have every right to question my taste.

The first story in the collection really sets the mood. Hard science and bittersweet... one might even say bleak. It reminded me of the first hard SF short story I read in ninth grade. The mood and the choices are similiar, but everything is different. Darker.

I had wanted to like this reality-questioning tale better than I had. It tells the story of a mirror being held up to reality revealing a flaw... which the best stories do, of course. But this is a literal allegory being allegorically literal with nesting realities of Russian dolls... which I think is all I can say without issuing a spoiler alert.

Still, fine writing and dialogue. I believe this vixen and stoat are people in every scene that they are in, and not just pushers of plot points. With luck, I'm the only reader that found this story less than fully satisfying.

The first sexually charged story in here may be the best. While not too explicit, it feels raw, honest, and sad. The logic of Vix is rather impeccable and the desire to be more is... well, as human as it gets. I was touched and impressed at the story telling, although it's a plotline we've all seen before... if you've gone down the darker alleys of sex and humanity. There's something about the dialogue and the author's voice that makes it feel fresh yet classically cruel.

In a fandom where we do actually have a few animated sex toys, I think this tale will resonate with a lot of readers.

The Ouroboros Plate - by Slip Wolf

This savory tale is cold, hard, and logical, but not too much of any of that. The horror is understated and so satisfyingly just that I think more than a few readers will miss the horror aspect if they discover this outside of the Bleak Horizons cover. As I hope many more will.

The First Viewing - by Corgi W

This story left me very uneasy, because I empathize a bit with Doschevov, the otter "villian" of the piece. As I writer, I do what he does, more or less, with his victims. Of course, I merely write fictional characters as I am a mere keyboard god. The otter, on the other hoof, plays with living minds. Structurally, the story uses the same device that the previous story did, and I was all too conscious of it... but that's just a meta issue, I guess.

This was a wonderfully hard SF Horror story. The symptoms and dangers were portrayed perfectly and mixed with on point Subject Matter Experts that moved the story along. The rat made for such good comedic relief, that I wished he had been included earlier.

This needs to be a movie.

A tangle in time sends a Tiger named Rhett through various time lines. I found it an engaging journey although the ultimate sense of the climax and ending felt just beyond me. Wiser readers than me may grok it more fully. For me, I was pulled more into the mystery of the situation than the actual horror (and that's fine). I admired the craftsmanship of the prose even as I was reading it. Maybe that threw me off the horror?

Because I am a TF (transformation fan), I adored this story and its setting. My adoration of co-mingling transformation may have lessened the horrors others might have found in this work. Don't care. I became... ok, nevermind, that would be over sharing. I don't think the author intended to create TFporn, but... here we are.

I loved everything about this story, from the characters to the story structure and context. In retrospect, if this story had any flaws, it might have been that different species might have different senses they could have shared, I mention this because I'm always going on about whether a furry story is "furry enough."

But I am too smitten with this story to care.

Sadly, the author is no longer here to write more stories

This is such a weird story. It reminds me of one of the most endearing anthology paperbacks that I've ever owned, "Carmen Miranda's Ghost Is Haunting Space Station 3." With a few changes, I really think this story could have been included. True, some of those stories were just plain silly, and this story is so much darker, but I can't help but feel like there's a connection. I find it equally endearing because the premise of a space station as an opera house is, on its face, an almost implausible ask.

Yet, the author makes it work. And makes the music almost everyone remembers from their childhood creepy. It's a smooth read.

This Way - by Frances Pauli

Dotar and Mifla are two alien augmented spiders, which aren't spoilers at all. Their very nonhuman build and movements are displayed to great effect without being distracting or inscrutable. Dotar was especially endearing right up until the end.

I didn't see the end coming leaving this a well crafted story in prose, pacing, and all the other elements of writing. It's not my favourite story, but it may well be the best.

The surviving crew of the Mushka are in isolation and being grilled/debriefed. It is not a pleasant experience for anyone. This is a very well structured story with multiple viewpoints. It is one of the few stories that I liked better the more times I reread it. Usually I am one and done. The horror elements are sweet, doled out in little steps with misery and paranoia as the main ingredients.

Despite an engaging opening, this is not my favorite story. It is, perhaps, too close to a certain old school Twilight Zone episode in plot and morality, if not McGuffin. The furry aspects added just enough anthropomorphic flavoring, but it did nothing to help the plot distinguish itself from the episode I'm sure most of us would recall with a bit of prodding.

The lines the enemy spouted in its reveal... it did not seem logical to me.

Clear and Cruel - by Bill Kieffer

This is my story, so I shan't review it. But I will tell you a story about it. I tripped on Bleak Horizon's story call a few days before the deadline. I mean, I was aware of it, but deadlines tend to sneak up on me. There's a reason the lead has my first name. Like William, I have minor Prosopagnosia, or face blindness, along with other issues due to a head injury when I was very young.

Blessed are the Meek - by Rechan

When I returned to reread this story as I wrote this review, the thing that stuck me immediately was how short this story was. 11 pages. The impression it had made in my mind was that there was much more to this than 11 pages could contain. The mole did a very good job with L277 and his brethren. Says a bit about humanity, this story does.

A nice bit of a horror thriller monster thing story that kept me turning the pages. No one had any possible theories of what the monster was, beyond a silly legend used to frighten kits, but otherwise the science felt like a real factor in the telling. None of the three characters were xeno-biologists, so it's not like it was anyone's job to explain it to me. And that's probably OK.

Space zombies. What can a guy do, am I right?