Capcom's Monster Hunter franchise has been around since 2004, and the title is self-explanatory. There are monsters. The player hunts them. These monsters aren't particularly anthropomorphic, but feature nice creature design, which furs appreciate, if the popularity of franchises like Pokémon and How to Train Your Dragon are anything to judge by.

And in Monster Hunter Rise, released in March for the Nintendo Switch, there are anthropomorphic animals in the form of the player's companions and helpers on the hunt, Palicoes and Palamutes. The former are cats who perform a variety of roles; while the latter are dogs, not anthro in form but probably sentient - though they are, well, mute. Together, they fight monsters!

For quite a while, the games were for hardcore gamers only; they're unforgiving if you mess up, and the games give you the absolute minimum of information about how to do things. I tried to play the other Switch Monster Hunter game, Monster Hunter Generations Ultimate, and I literally got stuck on a mission to mine ore from mineral deposits. Not fight a monster. Just collect items. I couldn't figure it out.

Rise is much more user-friendly. There are actually tutorials that pop up and tell you how to do things, which is nice. It would have told me that I need to craft pickaxes and only mine certain outcrops to find the special ore. Of course, Rise just does away with the whole early "go collect these items" missions to begin with, and lets you just hunt monsters. Plus, you don't have to make pickaxes, you permanently have one, it doesn't break. Generations Ultimate sent me out on a boring mission that you have to prepare diligently for or you will fail, and it doesn't tell you anything about this. Rise just skips this entirely.

To be clear, collecting random things and then using them to craft items is still a big part of Monster Hunt-ing and there are still "find five mushrooms" type quests available, but I want to stress they are optional, few in number and don't require having played this series since the Playstation 2 days to understand how to do them. Now, the challenge level of the series is actually one of its selling points, and long time fans may decry that it's not as hard as it used to be and this game holds the player's hands early on, which it kind of does. But, first of all, the game is called Monster Hunter, not Rock Miner, so just get ridding of that whole aspect was a definite improvement. (Second, this attitude of "well, I had to mine all my rocks myself back in the day, new players should have to experience that" is why we can't get a minimum wage increase or even partial college debt forgiveness in America.)

The main thing that makes these games so challenging is still there; Monster Hunter is a series with RPG-like elements where you never level up. The game doesn't give players experience points for successfully hunting monsters. What it does give you is the opportunity to make your character's armor and weapons better, and it might open the possibility of further boosts to your stats, if you take advantage of them. Much of the game is preparing for the next monster before you even go on the hunt. If you don't, you'll get your butt kicked. Okay, you can probably fight a Lagombi with your starter equipment while skipping a stat boosting meal, but it's basically a giant bunny. That's not going to work so well against a Barioth, if you even get far enough to see one.

Well, that's enough about the gameplay; let's talk about the parts of the game which are more interesting from a furry perspective - mainly the aesthetics. There's not much of a story to these games. They can basically be boiled down to "Yo, dude, there's, like, a monster over there. Could you go kill it, please?" Rise does give lip service to the idea that there should be something more than that, and there's something about a Horde of monsters on a Rampage, and there's one really big, bad one called Magnamalo that's behind it. But that's about it. (It also uses this vague plot thread to introduce a couple of optional quests combining Monster Hunter gameplay with castle defense type game mechanics; I skipped them.) 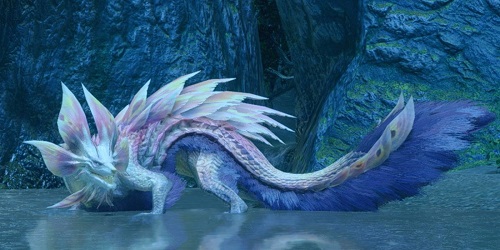 There are over 30 "Large" monsters to hunt in the base game, and more will become available via download as time goes by. There's a pleasing mixture of old favorites and new monsters. Obviously, my favorite and the probable favorite of a lot of furries is the Leviathan Mizutsune, which is basically Sisu from Raya and the Last Dragon except with a pink/purple/white color scheme, bubble-blowing powers and also a fox for some reason. The first time you actively hunt each type of monster, you get a short cutscene introducing them, accompanied by a recitation of a short poem… which must have been written by a Palamute, because they're complete doggerel.

Speaking of Palamutes, they're making their debut in this game; the other hunting Buddies, the Palicoes, have been around a while. Palamutes' main use, besides being an additional source of damage against enemy monsters, is as a steed to help you chase down fleeing Monsters. Palicoes, the anthropomorphic cats, are a bit more versatile, and can gather materials, help fight and heal, buff and cure statuses of players. The Palicoes especially get the best armor. I like the Khezu set, which gives them a nurse outfit. Unfortunately, due to the "upgrade to better stuff as soon as you're able" nature of the game, you don't get many opportunities to pick your (or your buddies') armor for aesthetics.

Now, one thing that I feel like I need to say, because it did bother me: if you "gotta catch 'em all" in Pokémon, well, in Monster Hunter, you gotta kill 'em all. It's Monster Hunter, after all. There are ways to capture monsters alive; but here, Rise sticks to tradition, gives you no help, and it's a very difficult process. Some furries may object to the basic premise of this game, and I respect that. Monster Hunter isn't for them.

If you don't have any moral qualms about rampantly killing wildlife to exploit their resources for personal gain, though, it's pretty fun.

Note: is in the works for "early 2022"; there are currently no plans for an Xbox or Playstation version.

Not for them, you say? It's true, though - some might take exception to the game's premise, not least as such monsters rarely retain their majesty once their heads are removed from their bodies and taken out of the wild. (I foresee a Pokémon Snap crossover.)

Then again, I seem to recall research suggesting that therians tended to be predators. Maybe they're not quite the animal-lovers you'd imagine. Or perhaps they don't want to be someone's next meal on the food chain.

The game does feature a camera which you are encouraged to photograph wildlife with.

Looks like the deals are already coming. Still, I imagine many gamers will wait for the PC version; and with the price of hardware, it's a good idea to wait for a new system, too. (Plus they found yet more Spectre issues - tough to fix, and expensive to mitigate.)

(Plus they found yet more Spectre issues - tough to fix, and expensive to mitigate.)