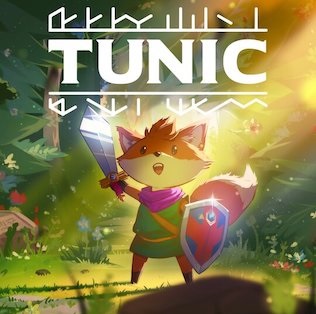 This game is going to be tough to review, in essence the game’s strength only remains a strength the less I say about it and what makes it so good. I suppose the best way to approach it is how it displays on its surface. A fox protagonist in a green tunic raises his sword and blue shield to go on an adventure. Many would instantly connect this iconography to the Zelda franchise.

The game can be Zelda-like for sure, but it’s important to know that not all of Zelda’s Link’s outings are created equal. So the best way I can describe this is that it’s a Zelda-like, also known as a “Hero’s Adventure” game, that feels very much like the franchise before it went into a heavy handed narrative focus.

For those not familiar with the Zelda series, it can be tough to explain, but in short, starting with Zelda’s venture into the Super Nintendo with Link to the Past, the game became much more narrative than exploration focused. The exception to this is the latest big venture in the series, Breath of the Wild. Like a breath of fresh air the exploration focus of the game was received exceptionally well since Nintendo broke free of the narrative binds the series was held in for the prior titles.

Tunic, in this spirit, is a lot like these earlier Zelda games with a modern aesthetic. It throws you into the world and while it may guide you in its own way, it does not stop to tell you the story. You must go out and piece it together yourself.

If that sounds interesting to you, stop here and play it. If you’re younger, I will say, this is the closest feeling you’ll get to playing an old console cartridge game in the times before the internet. I will try to avoid spoilers in the below sections, but the more blind you go in, the better in this game. Discovery of the game from within its world is the game’s strength.

From here on there will be very light spoilers, so don't read on if you want to go in fully blind. I feel I owe it to the game to not dive too deep in the article though, so most secrets and mechanics are still up to you to discover.

A Flight of Fights

Did I say Death’s Door was tough? This game’s bosses are a bit harder. Actually, given you can actually heal and I still died quite a bit, they are a lot tougher. You definitely need to try and use different skills and items to learn weaknesses. Some you need to keep your distance, others you need to get in their face.

The spike in difficulty at the bosses reminded me a bit of FIST: Forged in Shadow Torch.

Many people who have reviewed Tunic have gone over the tough combat and “Souls-like” aspects of it, such as healing flasks and campfire save points. I do like how the save points respawn enemies when you use it, creating a means of mitigating the ability to save scum after you clear out resistance. It gives each save point a more defined purpose without mitigating challenge. Plus it narratively makes sense, for reasons I won’t get into.

You can only hold three items and your shield, so you need to be careful as changing items will not pause the game, so go into the fights planning out the tools you’ll use before engaging, or you could put yourself in a bad spot.

The game keeps things fresh and introduces new mechanics and situations throughout the game. From upgrades to your six attributes you can unlock with a combination of money and items found in the world, to a spiritual hazy poison that can sap your max HP away along with a haunting scream and fuzziness that takes over the interface.

And like that creeping poison, as you dive deeper into this world, you may find that the soft and beautiful world has some dark and chilling moments beneath the surface. Death is no escape from this fox’s destiny. But maybe there is another way.

This game is in a strange way a time capsule that invokes the spirit of mystery and adventure that those of us who popped in those game carts back in early gaming would find ourselves in. What surprises would this game bring us? Would we be able to make interesting discoveries of secrets to pass that wisdom on to our friends?

Before we had the internet to assist us in our times of need, we had a community of our peers to discuss what we found. Did you find that warp zone at the end of 1-2 in Super Mario Bros? There is a secret if you bomb that bush in this screen.

In this more modern age of gaming we have two things that have stood in the way of this sense of wonder and mystery in gaming. One is that game designers seem to not have the guts to put in deep puzzles and secrets in fear of frustrating players, second is that the internet is quite quick to solve and share those secrets as soon as they are discovered. Rarely does a game present a guide to unlocking the secrets of its game without just handing the answers directly to you, or just letting the internet do it for you. In Chicory, a game that focused on puzzles rather than combat, I recall your dad-guide would sometimes state that you should use the internet if you need more details. I never had to, but it was still odd for the game itself to suggest it.

Tunic’s developers, however, have found a way to split this difference with beautiful expertise.

I won’t go into how they do this, but I will say if you love puzzles, you will adore this game. It has the greatest puzzles I have seen in gaming, easily surpassing Braid in being challenging but not needlessly opaque. It has been that long since a game has worked my brain muscles in a way that made me feel like I was actually thinking. And when you start discovering these things and solving them you start to feel like a madman drawing lines, making connections, but they’re working, there are secrets to this world.

Even in this I have said too much. It’s just a souls-like game, go out there and get gud.

I will end on this though, you know you’ve designed a wondrous puzzle when the elation the player felt when the game chimed that they had solved it surpasses the catharsis they felt when defeating the tough bosses and combat gauntlets they pushed through prior. My hope is that instead of more games getting more Souls-like in the future, more games put in puzzles that are more Tunic-like in the future.

Sadly though, puzzle solving may not make for the most entertaining of streaming as people getting destroyed by beasties on camera though. But perhaps I will be pleasantly surprised once again someday.

Aw, you beat me to it! I've been so busy. :-( Admittedly I've not played it, only watched other people playing it.

Yeah, a lot of comparisons are made to Zelda and Dark Souls; it borrows a lot from different games and combines them really well, plus there's a kind of... aesthetic that's vaguely familiar. At different points I was distantly reminded of Fez and Hyper Light Drifter. And of course it shares the isometric view like Death's Door, although there are a few places where the camera will do its own thing.

The design is simple, but effective, sometimes with georgeous lighting, and sometimes things get... dark and foreboding. The music in the background is also a big plus. I will say, it helps if you have a good mind for navigating your way around 3D spaces. As the explorable map gets larger, the paths become longer and sometimes a little convoluted, even after you figure out fast travel.

There are so many nice touches to this game. Light enemy A.I. to give fights a little more bite. The really interesting way the game manual was implemented. Character and enemy animations. And ohhh, the puzzles and secrets! You can play this game without 100%-ing it, but if you dedicate the time and effort to figure out the game's inner mysteries... You will feel such a feeling of satisfaction! There are additional levels upon levels to this game. Things in the design you don't even realize are there, until after a moment of clarity. (Or if someone else spoils it for you.) This is a rare gem, and the speedrunners are having a ball too.

It's also worth mentioning that for those who don't do well with fights, in the Accessibility menu there are settings like "No fail mode" and "No stamina restrictions", which can add a little quality of life while you play.

Recorded Stream of the play-though:

For those interested in the solving of the "Big Puzzle" of the game, that is basically the entirety of the Part 6 stream.

Yes, the puzzle took 4ish hours to solve. It's a chonker as noted.

I compared my vocals after downing the bosses and solving this puzzle [3:17:20 - Part 6], and the out of context you'd be hard pressed to feel a difference.

I still want to play this game at some point, so I'll avoid the review. I should probably write some reviews for smaller furry games. But the ones I've played lately have had more mature content... maybe a compilation-style review.

I don't think there would be anything against the idea of reviewing adult oriented games. You'd obviously have to put it forward that it's an adult's only game.