Klonoa's new remake is coming out!

Klonoa is a franchise by Bandai Namco that got its first release in 1997 for the PlayStation. Having reached great sales in the Japanese market, it got modest earnings in the west, large enough to approve a sequel, Klonoa 2, for the PlayStation 2. Both games got great reviews, and are platforming classics, but unfortunately diminishing sales killed the franchise, with one last re-release of the first game back in 2008 for the Wii.

The franchise is now being revived after all these years with a new remake of Klonoa 1+2, with great care and respect for the source material. Klonoa Phantasy Reverie Series comes out July 8th for PS4, PS5, Nintendo Switch, Xbox, and Steam (PC). Consoles get a physical release in Europe and Japan, with US receiving digital releases only.

Fans who played the original games were absolutely flabbergasted at the news, which came totally unexpected from a Nintendo Direct on February this year. 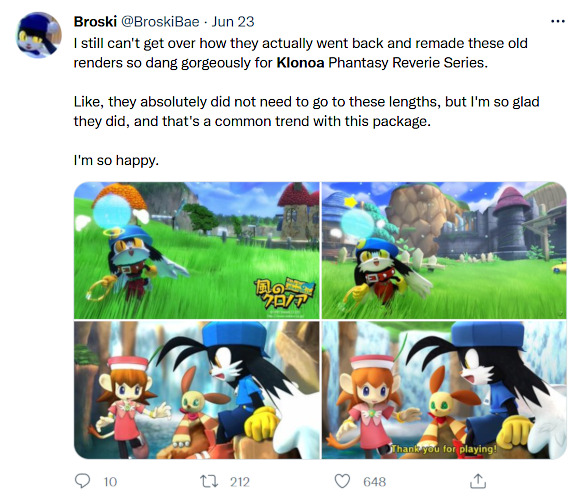 The passion it generates from fans isn't easily explainable with just images or videos though. As good as the gameplay is, which is really fun and easy to pick-up-and-play, the story is very emotional and endearing, and sticks with you even after all these years. In the words of Hideo Yoshizawa, director of the first game: 'We wanted to make an action game that would be enjoyed by both children and adults'. Their way of doing so, was having mature profound themes such as sorrow, abandonment, or perseverence, woven into the guiding threat that moves the game forward.

The story is reminiscent of the manga/anime Unico the Unicorn, in which a lovable unicorn with the power of solving people's problems and making everyone happier, is forced to leave and move on every time he succeeds. In the same way, Klonoa is a Dream Traveler, not a specific animal species but a force for good in the shape of a flappy-eared creature, that makes a positive change wherever he appears.

The gameplay is classic platforming within a 3D environment, a style that was named 2.5D, which was very creative at the time and only a handful of games tried it out. Klonoa uses enemies to double bounce, making it simple to play but tought to master.

Colorful, fun, entertaining, charming, make sure to purchase Klonoa Phantasy Reverie Series when it comes out next week! And play it! Here's some gameplay!