Your ever-loving edotter got a chance to see a preview screening of Puss In Boots: The Last Wish, the upcoming animated feature from Dreamworks Animation, directed by Joel Crawford and Januel Mercado. Here’s the basic plot summary: The unstoppable adventurer Puss in Boots discovers that he has burned up eight of his nine lives through a series of mishaps. He goes on a desperate quest to find a fallen star with magic wishing powers, hoping to restore his invulnerability. Trouble is, the cat has lots of competition for the star — and a malevolent force following right behind him. So here are some Spoiler-Free thoughts about the film: See It, as soon as you can.  Not only is this a cracking good adventure film, darker than you expect it to be in places, but it’s also quite easily the furriest film ever in the Shrek universe. In fact, there’s a wolf in this film who could easily give the head Bad Guy a run for his money. This new film is coming to theaters on December 21st. 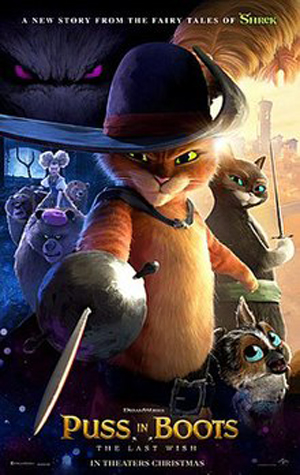