Whee! We’re bringing you announcements from Cartoon Brew of lots of international animated theatrical features that will probably never come to the U.S. This time it’s a French movie, variously Evolution Man, or, How I Ate My Father or Animal Kingdom: Let’s Go Ape, that is being released theatrically in Britain this month.

Is it anthropomorphic? Surely, if you consider pre-homo sapiens primates to be animals. Otherwise? Hard to say from this trailer (which is one of two), but there are at least lots of animals presented in a manner that furry fans should enjoy.

It’s time we caught up with The Humans. Which is to say Keenan Marshall Keller and Tom Neely’s new full-color comic book series from Image. Take the violent biker culture of the early 1970′s. Set it in dusty Bakersfield, California. And make the protagonists all walking, talking, humanoid apes. In leather. On big bikes. There you go. “The Humans is one long and twisted ride through biker gang warfare, drug running, corrupt cops, semi-truck hijackings, Vietnam flashbacks, Skin Fights (homosapien cockfighting), major ultra-violence, a strip club called The Forbidden Zone, and bloody vengeance.” Sounds like quite a party. Check out theinterview with the creators over at The Nerdist, and look for the first issue to come out this November. 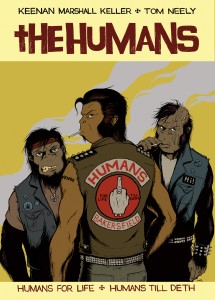 The Apes Shall Rise

Boom! Studios, which have had several Planet of the Apes tie-in titles over the years, now turn their sights toward this summer’s hit movie — with a new full-color comic book miniseries titled, appropriately enough, Dawn of the Planet of the Apes. “Bridging the 10-year gap between the Rise of the Planet of the Apes and Dawn of the Planet of the Apes films, fans will bear witness to the fall of humanity and the rise of Caesar’s civilization. While the apes of the world have yet to advance as a species, Caesar must find a way to unify in them to one cause. On the other side of the country, Malcolm must venture into the decaying Americas with his family to find a cure for the plague slowly killing his wife, Rita. World powers will shift as civilizations collapse and rise.” Written by Michael Moreci (Curse, Hoax Hunters) and illustrated by Dan McDaid (Mind the Gap),  issue #1 of the the new Dawn is available now. 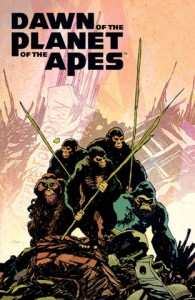 She’s a Superhero. Dad’s an Ape.

Sometimes things are described in a very straightforward manner: “The Adventures of Aero-Girl. It’s the story of a young jet-pack wearing sidekick who must not only deal with the death of her father & mentor, but also that his powers (and her destiny) have been transferred to a silverback gorilla.” It’s also a new self-published 4-issue comic book miniseries, written by DeWayne Feenstra and illustrated in full color by Axur Eneas and Juan Pablo Riebeling. After a successful Kickstarter campaign this summer the first issue is available now, so check it out over at Fan Girls Are We. 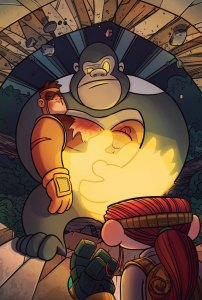 What more could you ask for on the weekend? Somehow we missed this: Empire of the Apes, directed by Mark Polonia. “In a distant galaxy three escaped female convicts crash land on a primitive world inhabited by a race of warlike apes. They fight for survival as the humanoid apes fight for their possession, body and soul. A daring escape is their only way out. Hot on their heels are the blood lusting gorillas and a prison warden bent on their return to the prison ship they escaped from.” Got it? You have got to see the trailer for this thing! Could its release on DVD have anything to do with the new Apes movie coming to theaters this summer? Nah! Well anyway, the DVD is available on Amazon. 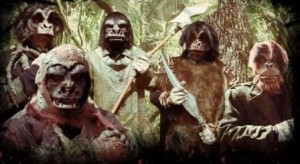 A brand new trailer is making the rounds for Dawn of the Planet of the Apes, coming to theaters in July of 2014. It seems that the virus revealed at the end of 2011′s Rise of the Planet of the Apes did not in fact wipe out Humanity, though it gave it the old college try. Now the remaining humans and the tribe of evolved apes (lead, of course, by Caesar) have gone to war, and then formed an uneasy truce. That peace is fragile though, and war seems like it is always just on the horizon. Once again, Caesar the CGI chimp is modeled by the multi-talented actor Andy Serkis. Taking over the reins for Rise’s director Rupert Wyatt this time is newcomer Matt Reeves, perhaps best known as the director of the “reality monster movie” Cloverfield. Currently 20th Century Fox’s official site for the film only has the trailer up, but that will probably be added to as we swing into the new year.  See what we did there? 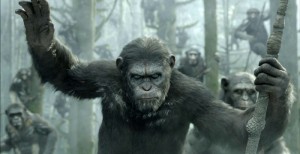 We’ve said it before, we’ll say it again: We couldn’t make up some of this stuff if we tried. Somehow we missed the 2002 direct-to-video film Play-Mate of the Apes, a soft-core erotic spoof starring Misty Mundae. It’s described and discussed on the Internet Movie Database, though. Now Seduction Cinema Comics is presenting the Play-Mate of the Apes Deluxe Pack, coming (no pun) this July. The Deluxe Pack not only features the original film on DVD, but also a brand-new full-color comic book version of the film written by John Bacchus (the original film’s director) and illustrated by Noel Scotch Anderson. What’s it all about? “Sexy and fearless U.S. astronaut Gaylor and her shipmates crash land on a desolate planet dominated by a tyrannical race of intelligent talking apes, sparking a revolution of untamed and uninhibited female lust that threatens to bring down the repressive ape society…or set it free!” You heard it here. You can check it out on Things From Another World, too. 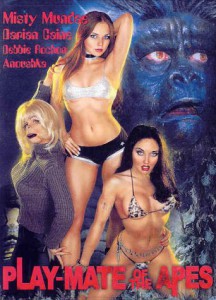