It's time to nominate the contenders for the 2018 Ursa Major Awards! You can send in your nominations until February 16, 2019. We'll see which of them get onto the final ballot in March, when voting opens, and the winners will be announced at AnthrOhio in late May.

If you really liked something in 2018 that had anthropomorphic content, either inside or outside the fandom, you can nominate up to five things in each category! Nominations are completely optional - you can even skip entire categories. All you need to do is go to the nominations page, click where it says "Enroll", and give it a valid email address. You'll be emailed a code, and you can use that to log in and fill out the nomination form.

Nominations for the 2017 Ursa Major Awards will open on January 11, the first day of Further Confusion 2018. The awards celebrate the best anthropomorphic literature and art first published during the previous calendar year.

Find out more details at how to participate at our webpage: http://www.ursamajorawards.org/

From January 12 to February 28, 2017, it's time to nominate your favorite furry creations for the 2016 Ursa Major Awards!

Is there a furry comic, story, movie, video, podcast, or anything else with furry content that brightened your day last year? Nominate it – don't put it off until the last minute!

You can nominate up to five things in each of twelve categories. If you're unsure what to nominate, check out the 2016 Recommendations… and you can nominate titles that aren't on that list! It's there to give ideas, to help you find furry stuff that you might not have heard of.

Sometimes, a Nomination or a Recommendation feels like it fits into more than one category. You can browse previous years (like the 2015 Recommendations) to see where something should go. As of 2016 there's a new category: Best Anthropomorphic Non-Fiction Work. Voting for the 2015 Ursa Major Awards, for the Best Anthropomorphic Literature and Art of the 2015 calendar year in eleven categories, is now open. The voting is open from March 15 to April 30. The awards will be announced at a presentation ceremony at What the Fur 2016, in Montreal, Quebec, on May 20-22, 2016.

Voting is open to all! To vote, go to the Ursa Major Awards website and click on "Voting for 2015" at the left. You will receive instructions on how to register to vote. You do not have to vote in every category. Please vote in only those categories in which you feel knowledgeable.

This final ballot has been compiled from those works receiving the most nominations that were eligible. Please check the dates of publication next year to make sure that your nominations are only for works published during the calendar year (January through December) in question.

Update (22 May): The results have been announced. No Evil is an animated series of short videos by Betsy Lee (aka Warlord of Noodles), featuring a group of anthropomorphic animal spirits inspired by Aztec mythology and folklore from all across North and South America. Throw in the influence of literary, historical and folk heroes, and you've got a great mix of characters. (Click on the thumbnails for larger images.)

The story involves the spirits trying to deal with the return of a dark, spreading entity that causes a deadly sleeping sickness, which they call the Black Tezcatlipoca, or "black ick" for short, except it's just one problem amongst many that they're having to deal with, such as escalating tensions between the nearby villages.

Have you nominated your choices for the 2015 Ursa Major Awards, for the best new anthropomorphic releases of 2015 in eleven categories? Nominations close on February 29, in only two weeks.

The categories are Best Anthropomorphic Motion Picture, Best Anthropomorphic Dramatic Short Work or Series, and so on for Novel, Short Fiction, Other Literary Work (anthologies, collections, non-fiction and art books), Graphic Story, Comic Strip, Magazines, Published Illustration, Game and Website. Works first published or released during the 2015 calendar year are eligible. You may make up to five nominations in each category.

Many nominations for the 2015 Ursa Major Awards are likely to come from the 2015 Recommended Anthropomorphic Reading List, which has been built up through prior recommendations. The awards are selected by a two-stage process of nominating and voting. Members of the public send in up to five nominations in each of the eleven categories. The top five nominees in each category (more in case of a tie) are then presented on a final ballot for a public vote. Inclusion on the List is not necessary for nomination if a work is otherwise eligible; first published during January to December 2015.

The voting will be counted, the winners’ trophies prepared, and the results will be announced at the Ursa Major awards presentation at a ceremony at What the Fur 2016, at the Holiday Inn Hotel & Suites, Pointe-Claire, Montreal Airport, Montreal, Quebec, Canada, on May 20-22.

The Ursa Major Awards and Recommended List are administered by the Anthropomorphic Literature and Arts Association (ALAA). For information, and to nominate beginning on January 14 and to vote beginning on March 15, go to http://www.ursamajorawards.org/.

The ALAA’s 2015 Anthropomorphic Recommended Reading List has already had its November update, and will post its December update in a week. This includes all of the anthropomorphic works published or released during 2015 that have been submitted by someone as being worth reading, looking at, or playing. Look it over and see if you have been missing anything.

If there is any 2015 work that you feel is worth recommending that is not on the List, please hurry and submit it to recommended@ursamajorawards.org.

The ALAA’s 2015 Anthropomorphic Recommended List has been updated from August to October 15. This includes all of the anthropomorphic works published or released during 2015 that have been submitted by someone as being worth reading, looking at, or playing. Look it over and see if you have been missing anything.

If there is any 2015 work that you feel is worth recommending that is not on here, please submit it for the next update to recommended@ursamajorawards.org. It is almost the end of 2015, so do not delay!

The Anthropomorphics Literature and Arts Association (ALAA), which administers the annual Ursa Major Awards, has updated the 2015 Anthropomorphics Reading List to include the titles recommended by furry fans through August 8. This list is often used by fans to nominate in the next year’s Awards.

All fans are invited to recommend worthwhile anthropomorphic works in eleven categories (motion pictures, dramatic short films or broadcasts, novels, short fiction, other literary works, graphic stories, comic strips, magazines, published illustrations, websites, and games) first published during 2015, if they are not already on the list. Send in your recommendations to recommended@ursamajorawards.org, and read the List to see what other fans have recommended.

Nominations for the 2015 Ursa Major Awards, in the same eleven categories, will open on 14 January 2016 (the first day of Further Confusion 2016) and will be accepted until 28 February. Don’t miss this opportunity to nominate the titles that you felt have been the best anthropomorphic movies, novels, comic strips and books, websites, games, etc. of 2015 for the Awards. And don’t forget to vote when the polls open on 15 March.

Making quite a buzz at this year’s Sundance Film Festival was a series of animated shorts made for television and the web, of all things. Animals is a black & white, minimally-animated series which “follows various New York City creatures as they get into awkward (and sometimes deadly) encounters with one another.” The series was created by Phil Matarese and Mike Luciano, two employees at a commercial production house who took some time off to make little animals talk to each other. Check out the Animals web site to see what the fuss is about. 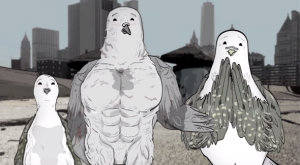 In an interesting article over at Cartoon Brew, writer Scott Thill discusses a notable animated cartoon short — which is celebrating its 75th anniversary. The amazing thing is that it was made at all. Peace on Earth was created at MGM Animation (the home of Tom & Jerry) and directed by Hugh Harman. Despite the objections of MGM executive Fred Quimby, the film was finished: And for a cartoon finished right before the outbreak of World War II, it’s quite surprising. An elderly squirrel (voiced by an un-credited Mel Blanc) tells his young grand-kids the story of the end of human-kind in a terrible war… and how the animals, directed by the Bible, re-built the world and declared an end to conflicts and fighting of all kinds. An end which they celebrate and renew every year at Christmas. Seriously, go check it out at the bottom of the article. This film is very hard to find — but likely, it should be seen a lot more. 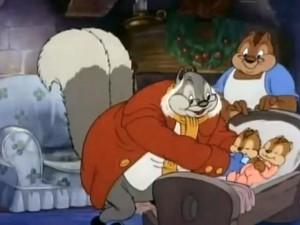 'Kaze, Ghost Warrior' released for free; new series to be introduced at Anthrocon 2014

The full verison of Kaze, Ghost Warrior (2004; Flayrah review) has been released to YouTube, in advance of a panel at Anthrocon 2014 covering a planned successor series.

E. Amadhia Albee: On Friday, July 4th at Anthrocon from 3-4pm in room DLCC 319-321, after a short retrospective about where the search for Hollywood funding succeeded and where it failed, we will be introducing the production team behind Kaze: Winds of Change, the new series that chronicles the love between Kaze and 'Bay, and the fall of the Kenmai dynasty.

We will be announcing an open casting call for the remaining parts in episodes 1 & 2 (scheduled for release at FurWAG in early October of this year), and we will be sharing a teaser recording of some of our principal cast doing a read-through of one of the scenes from the upcoming episodes. Close to 4p, we will be sharing a major bit of news that will likely have great appeal to Kaze fans.