The Wolf Children Ame and Yuki (trailer 1 - 2) is a 2012 anime film directed by Mamoru Hosoda. Unlike his 2009 Summer Wars, this movie is very slow, introspective, and somewhat tragic. It might appeal to a small subset of furries, but its furry elements are underplayed and it may not have enough animal content to hook us as viewers.

Talking about this movie without spoiling it impossible because the story has no complexity. Basically, a single mom moves to the country and struggles to raise two werewolf kids; one embraces their wolf heritage, the other rejects it, and the family moves apart. That's it. (See Wikipedia for a more complete summary.)

More from Cartoon Brew: They have a first look at Okami kodomo no ame to yuki, a new 2D anime feature directed by Mamoru Hosoda. The title translates as The Wolf Children Ame and Yuki. Here’s the basic press release: “From the director of The Girl Who Leapt Through Time and Summer Wars, the story of a college student named Hana who marries a ‘wolf man’ and gives birth to two wolf children. When the wolf man dies, Hana and the children move from the city to a quiet rural town.” The film is being distributed by TOHO Studios, and it’s set for release (at least in Japan) this July. There’s not much yet on the film’s web site (and what’s there is in Japanese), but they’ll add to it as the year goes along. 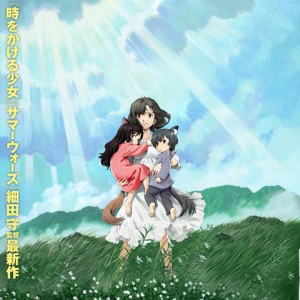