'Savage Species': that time Wizards of the Coast called furries a bunch of jackasses

In the far-off time of 2003, Wizards of the Coast published an expansion to the rules of its popular Advanced Dungeons & Dragons role-playing game known as Savage Species. It’s purpose was to allow players to choose one of the many monsters the game featured as a playable race and still allow them to play with players sticking with one of the Player’s Handbook pre-approved playable races, who were either human or basically humans, just with pointy ears or a shorter build than normal.

The appeal to furries is obvious. The Monster Manual contained various anthropomorphic animal races, including minotaurs, gnolls, kobolds and many others that furries would almost rather certainly play than just vanilla humans and the human adjacent. In addition, tucked into the third appendix of Savage Species was added a new “creature template”, which could be added to existing creatures, specifically animals. That template was known as “anthropomorphic animal.”

Unfortunately, this was the far off time of 2003, and the reputation of the furry fandom among other geek cultures was not good. Wizards of the Coast didn’t mind if furries wanted to buy their expensive add-on books, but they also wanted to make sure to signal to all the other non-furry geeks this wasn’t a furry book and also they didn’t really like furries either. They did this with the selection of the example animal that the template was applied to: a donkey, which we’ve covered the symbolism of elsewhere. The Donkey King (trailer) is a computer-animated comedy film, and the fifth animated feature from Pakistan. Originally released in 2018 in the Urdu language, an English dub was released in 2020. It was written and directed by Aziz Jindani, and produced by Talisman Studios.

It broke box office records in Pakistan, though I'm mystified as to how, because to me it's not a good film. Maybe its target audience had different expectations, or there were cultural reasons, which, if any, have been lost in the English dub. Don't watch this movie.

The premise starts with King Khan, a lion who rules over a city of anthropomorphic animals. He wants to retire, but his son, Prince Shazad, wouldn't be a good replacement. Miss Fitna, his treacherous fox advisor, proposes that a new king should be chosen democratically in an election …which is not how monarchies work. Her plan involves deposing the king so she can manipulate someone in his place, specifically the film's protagonist, a donkey named Mangu.

This February, Papercutz (home to the Geronimo Stilton series) presents a brand new full color graphic novel by multiple award-winning author Emmanuel Guibert and renowned illustrator Marc Boutavant — Ariol, Volume 1: Just a Donkey Like You and Me. “Ariol is your everyday tween donkey with blue glasses. He lives in the suburbs with his mom and dad. His best friend is a pig. He’s in love with a beautiful cow in his class. His teacher is a dog. His gym teacher is a huge rooster. In short, Ariol is just like you and me.” Pre-order this new softcover book at Amazon or Barnes & Noble. 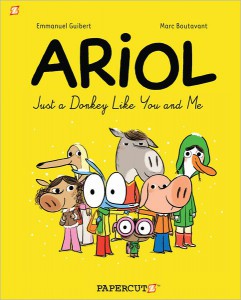 The back-cover blurb for Archival: Most Secret is accurate but misleading.

Join the heir to a faerie legacy and his bloody companion on a journey that ends before the very ramparts of New Orleans and in the smoke of a terrifying battle. What was the secret Winston Churchill’s valet sought to share with his employer from beyond the grave? Meet Flight Lieutenant Neville ‘Bunny’ Edwards, who in the course of the Second World War loses his humanity, but never his courage or his determination to stay in the fighting.

In these three stories, in the form of letters, diaries, journal entries, and interviews covering the years 1805-14, 1894, and 1941, magic is so prevalent that a secret Ministry of the British government has to be formed to practice and combat it.

Isiah had the chance to interview most of the contributors to annual adult anthology Heat 9, published by Sofawolf; some could not be reached. Related interviews: Camron & Vantid – Alopex – Kandrel & Scappo – Huskyteer – Kyell Gold & Nimrais – Tempe O'kun

Isiah Jacobs: Good evening, gentlemen! Thank you both so much for joining me tonight, it's a pleasure to have you both on the show!

Whyte Yote: Thanks for having us.

Isiah Jacobs: Whyte, Alastair, as I understand it, you both have sort of collaborated in this year's issue of Heat. Whyte, you wrote a short story called "Two Minutes" and Alastair, you provided the illustrations.

Whyte Yote: Well, I wouldn't call it "collaboration" as much as "I didn't know who was doing my illustrations until Alopex told me after they were done." XD He likes surprises. Plus, publisher's prerogative.

Adult Swim's 'Check It Out' to profile furries on Sunday night

Update (18 Apr): The full segment is now available, but has no more furry-specific content.

Interviewer 'Dr. Steve Brule' leads with such incisive questions as "How come you wanna be an animal?", "What kind of animal do you want to be?" and "How do you catch an animal?" Excited by the concept, he suggests "[turning] into some animals and see what'd happen!"

Brule (dressed in a donkey suit) was not impressed by the resulting mini-fursuit-parade, calling it "not that fun", but "what else are you gonna do, dressed up like a dang animal?"

The furs, Amy and Crash the Dog, were recruited after the producers had difficulty finding participants. [Higgs Raccoon]

Everyone knows the conventional wisdom. With 63 chromosomes from their horse and donkey parents, mules shouldn't be able to breed.
In fact, the owner of the Moroccian mule was so oblivious to the pregnancy, she rode her to market the day before the birth. The adorable tyke is one of only 3 confirmed mule births in the last quarter century.
Sure, it's no virgin shark, but it's still pretty neat.

Reported by Reuters: A seven-year-old boy in Marrakesh, Morocco had his penis bitten off by a donkey. Surgeons have managed to get it reattached, but they aren't saying how it got bitten off in the first place.

The world Poitou population just went up by one. And where there's less than 200 of you, that's a big deal.
The very rare and prehistoric looking variety of donkey was born to a mother mare, using a new technique which helps trick the surrogate mother into thinking the implanted embryo is her own pregnancy, vasty reducing complications and miscarrage.
The embryo had to be 'relocated' when the mother donkey's knee problems put it into doubt whether she could sustain a baby to term.
Scientists say the technique, used first here to help a similar species become a surrogate for a rare cousin, will be a boon to endangered species reproduction, as well as rare breeds. Like the Poitou.